Typing Hindi, Marathi, Sanskrit on the iPhone or iPad

This is a quick guide to configuring your iPad or iPhone so that you can type in languages that use the Devanagari script – languages such as Hindi, Marathi, Sanskrit, Nepali, Sindhi etc.


There is a similar guide for Android users here.

Note that we don't need to download any fonts or apps or anything, as your iPhone or iPad (or any other iOS device) comes with this functionality built-in. We just need to turn it on and learn how to use it. That's what this guide aims to explain.

For starters, you need to enable the Devnagari keyboard on your device. To do this, follow these steps: 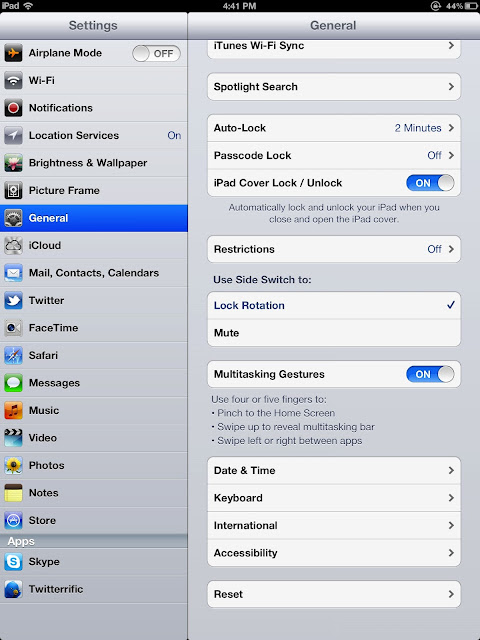 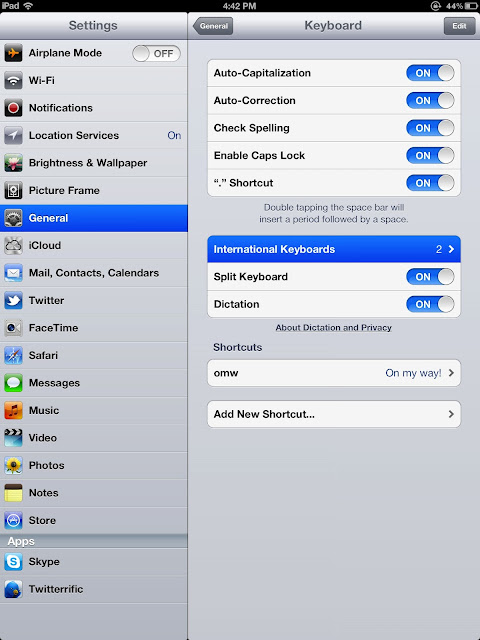 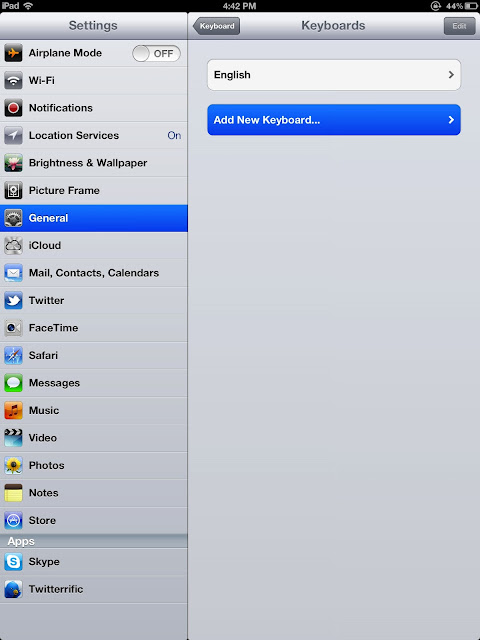 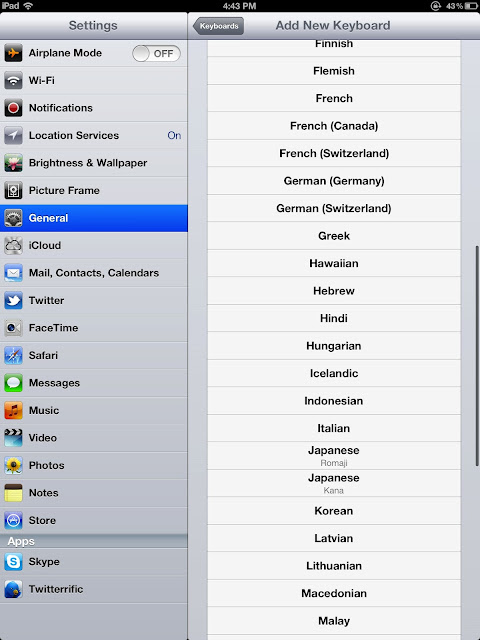 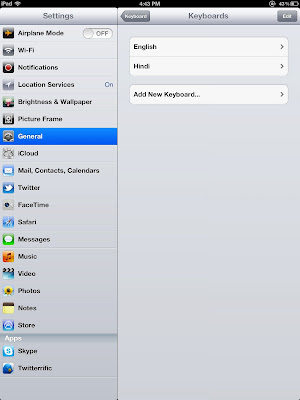 Here's how you use the keyboard you just configured: 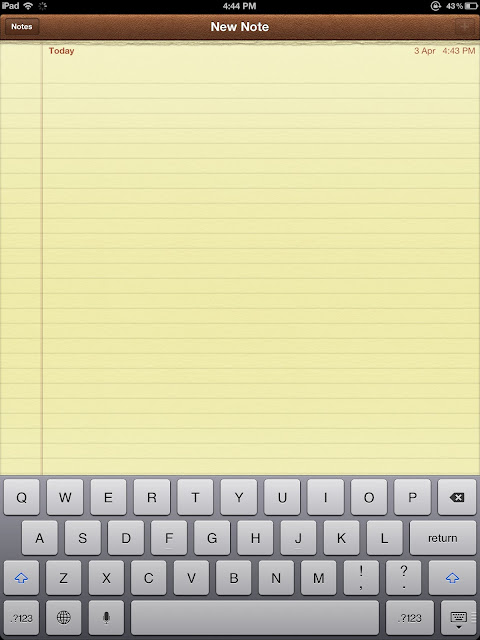 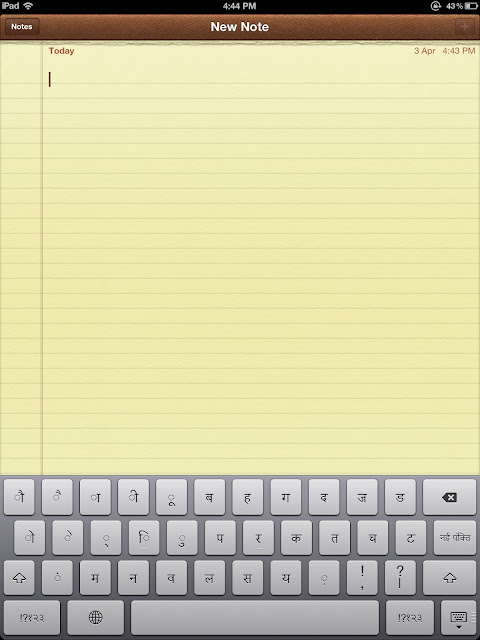 How are the keys laid out on the INSCRIPT keyboard?


If you're familiar with the Devanagari consonants and vowels and their order as we learn in school (अ,आ,इ,ई… and क,ख,ग,घ…) you will find it very easy to navigate this keyboard. For starters, these are the Devanagari vowels in order:
The vowels are laid out on the keyboard on the top and middle row on the left. For touch-typists, the areas on the top and middle rows "owned" by the left-hand – ie. the A-G and the Q-T sections on the QWERTY keyboard – are the basic vowels. To type the standalone vowel signs, you use the Shift key. Otherwise, the vowel signs are the combining ones.

Here's the combining vowels when the shift key isn't pressed:

And the standalone vowels when the shift key is pressed: 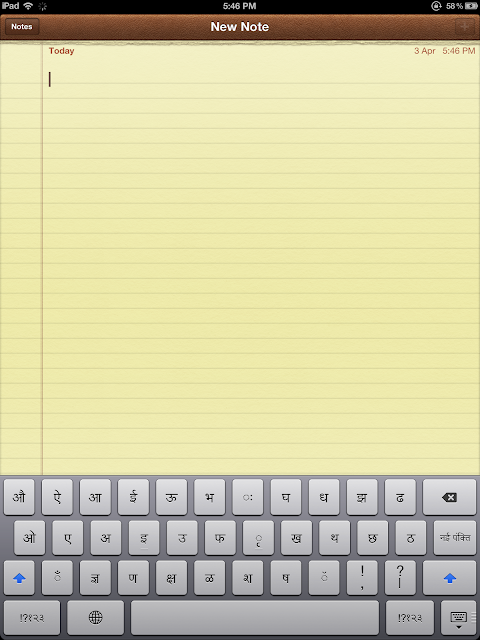 To give QWERTY positions of the vowels in their order:
The consonants similarly flair out in Devanagari order from the middle-right-key (the K key on QWERTY). For the aspiration versions of the consonants, you tap the Shift key.

Here are the consonants in the Devanagari syllabary, usually read row-wise from left-to-right:


Technical Note for Linguist Nerds. Others Can Ignore:
The Wikipedia page has the technically super-correct arrangement so that it's easy to know how to pronounce these consonants, but the order above is the one we learn and memorise in school where the semi-vowels and others are lumped into one row after the labial sounds.

If you examine the layout, you can work out the pattern in which the consonants are laid out corresponding to their order in the syllabary. Here's the layout without the Shift key pressed:

And when the shift key is pressed:

So for instance, to type आप, this is the sequence you'd follow: 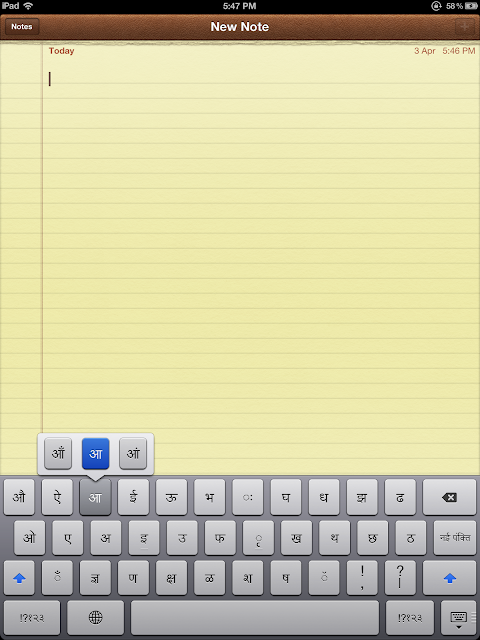 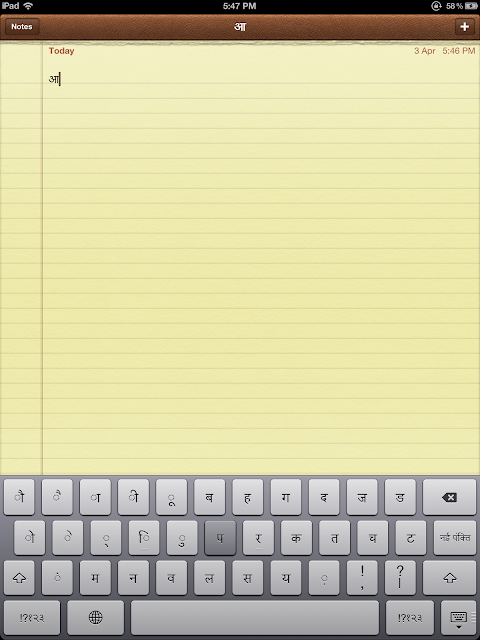 To type हिन्दी, again you type it out exactly like you say it:
First, tap the ह. 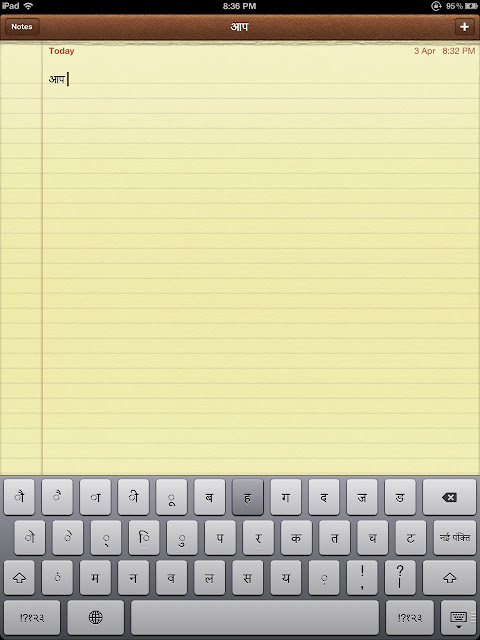 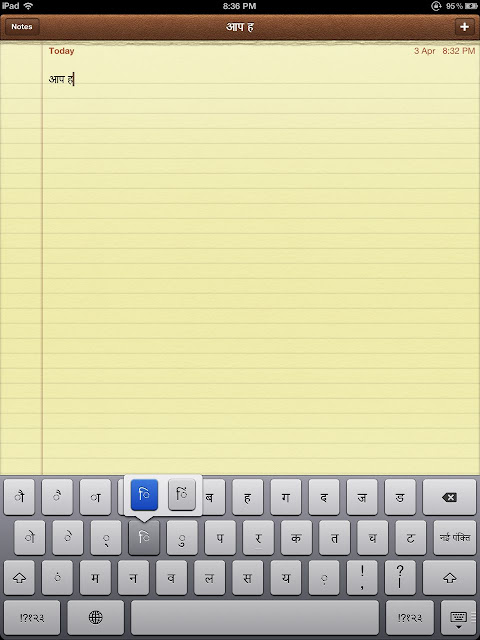 Followed by the न, we have हिन: 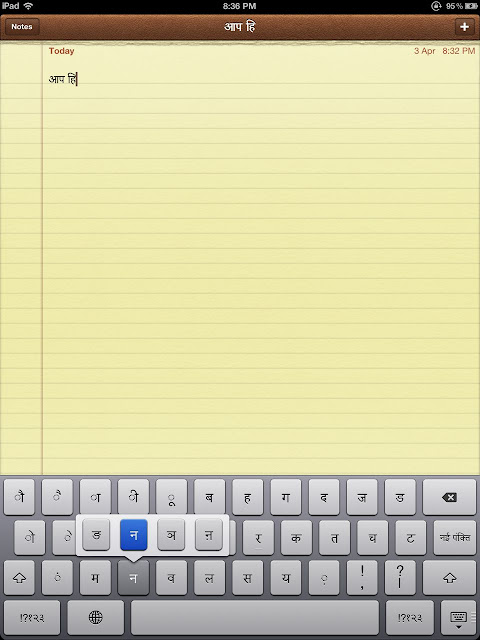 Now, we want to cut the न and turn it into न् to prepare it for joining with the following consonant and turning it into न्द. We do this by pressing the  ्  combining character (called a 'reph'). By the by, as you see below, the in-built Hindi dictionary is already suggesting an auto-correct for हिन – it's wondering if we're trying to say बिन :). 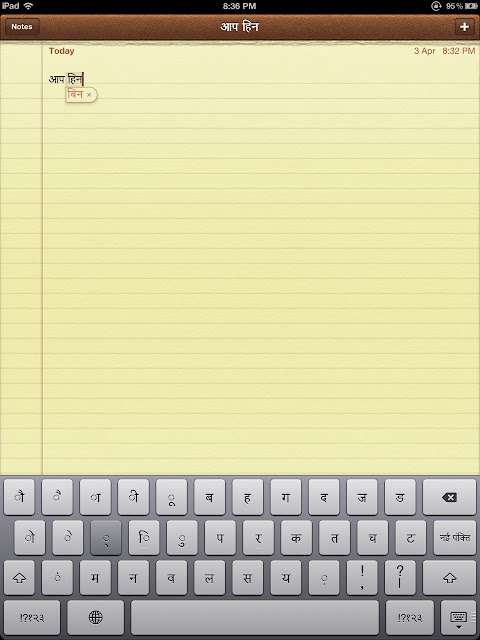 Tap द to join the waiting न् to form the compound consonant (or what we call संयुक्ताक्षर or जोडाक्षर) न्द. 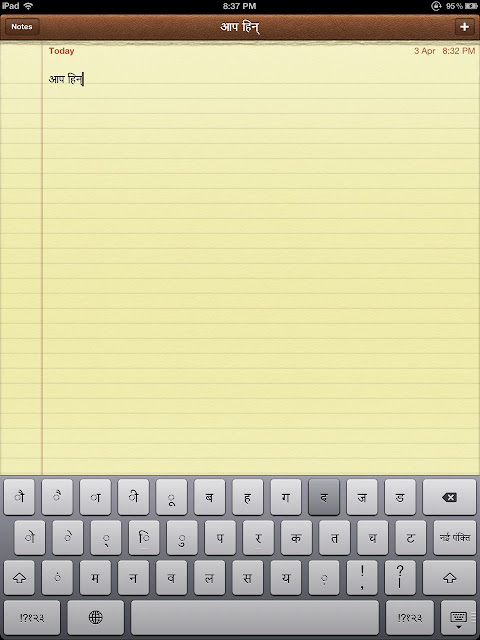 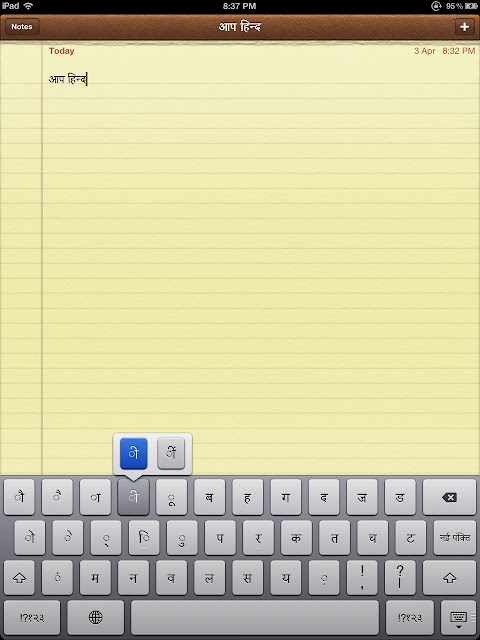 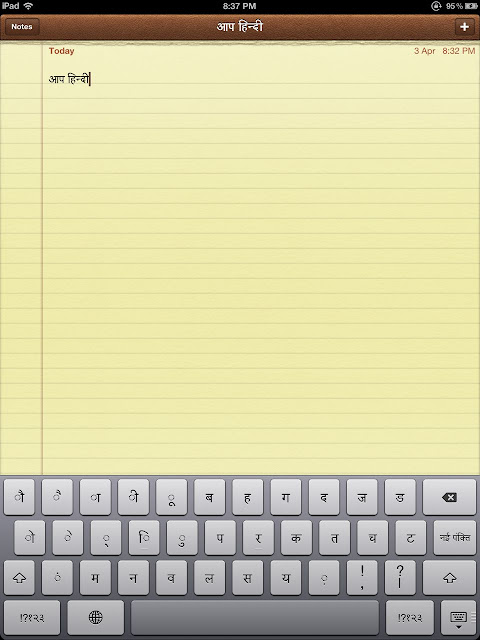 Here's me typing out a sentence: 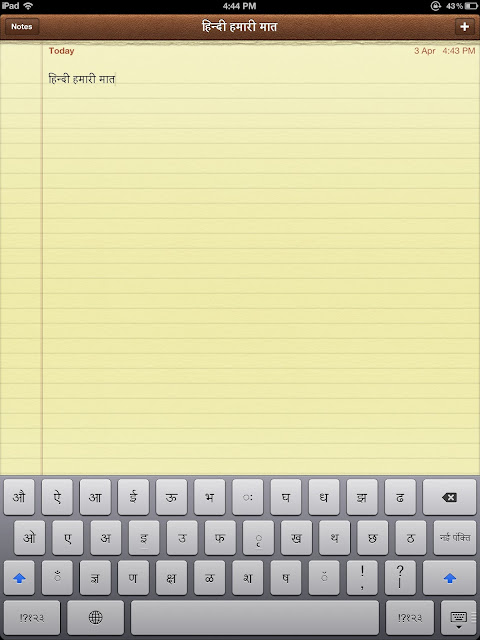 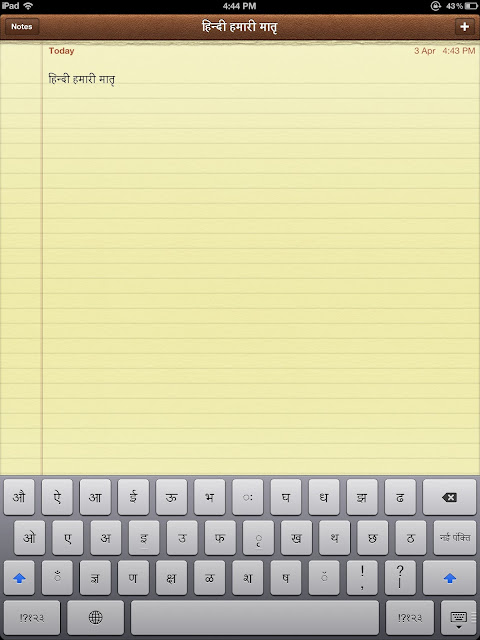 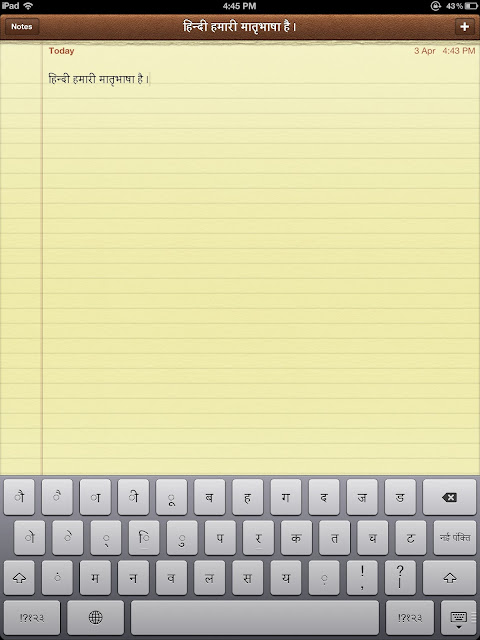 Now once you know the basic idea behind how the keyboard is laid out, play around. It just takes a bit of practice to get comfortable and gradually ramp up your speed on typing Hindi, or Marathi or Sanskrit or Sindhi on your device. There are some idiosyncrasies and exceptions in the layout of course — the nasals, the semi-vowels row and uncommon signs are strewn about – as you'll find out when you start playing with the keyboard but again, those are also easily learned and become second nature.

Also, just like the English keyboard, keeping some keys pressed provides multiple additional options for that key. For instance, to type the ऱ्य character in Marathi words like बऱ्याच or कैऱ्या, get ऱ which shows up as an option when you keep र pressed and then tap the reph character as described above to turn it into the Marathi र, ready to be joined to its य. Play around and explore the keyboard and you'll find other such characters that you can type.

Another cool trick: Apple has already added our new Rupee symbol (₹) to these devices. To type it, press the numerals key, then keep the $ (dollar sign) pressed, and the new Rupee symbol will show up as one of the options! Cool, huh!?

By the way, once you learn this keyboard, you can type on Macs, Windows or any other system that support Devanagari input because this INSCRIPT layout is the one that's supported by all systems by default as it's definitive – ie. the character is exactly what you type in and isn't something that needs to be guessed by an intelligent IME software component.

If you have any questions or need more clarification, fire away using the Comments section below.

Posted by The Weird Indian at 1:47 PM