It's always amusing to see a discussion between Hindus and Pakistanis go awry as it descends into the usual hate-filled mud-slinging. Both sides operate with their unique perspectives on their history which results in much talking past each other.

From the most common Pakistani perspective, Muslims are the innocent victims of Hindu hate. They find it baffling why for no crime of theirs, they are constantly the victim of hate directed at them by Hindus. The perspective is formed from hearing about events like the destruction of the Babri Masjid, the regular riots and killings between Hindus and Muslims in India, the supposed persecution of Muslims by a Hindu army in Kashmir, the constant mention of discrimination against Muslims that makes its way to Pakistani newspapers. They find it a betrayal of sorts that after an Islamic rule of a thousand years, where Hindus were allowed to practice their religion (with some limitations), Hindus should hate and discriminate against them, and should feel themselves to be the rightful rulers over and superiors of all others in the subcontinent. In their view, Indian history or the history of any region in the world is one of conquests and counter conquests, so they don't understand why Muslim conquests should be singled out as a reason for hatred. The extremists among Muslims feel that the Ummah is the only Nation to identify with, that an Islamic society is the only right answer and that Islam needs to rule over India again, and that the kafirs need to be converted to the One True Faith.

From the most common Hindu perspective, Hindus are the innocent victims of Muslim hate. From being subjected to mass murder and conversion for centuries simply because they don't believe in Islam, derided as idolators, cow-worshippers, backward, caste-ridden and inferior to Muslims, to being victims of campaigns against them in Kashmir, they find the Muslims to be constantly looking to trouble them. The perspective is formed after learning about how brutally the Muslim conquerors of yore subjugated ancient Hindu kingdoms, killing hundreds of thousands in one day as part of their conquests, or of hearing Muslims glorify their rule which was extremely painful for Hindus, of experiencing ethnic cleansing at the hands of terrorists in Kashmir who emptied the valley of Hindus in the 90s with gun-backed calls of "Kashmir may rahna hai to Allah-u-Akbar kehna hai" among others, of hearing about how the Hindu populations in Islamic states are treated, of hearing about terrorist attacks constantly claimed by Muslim extremists as glorious victories against the "infidels". This view holds that India is a multi-religious, multi-ethnic, diverse and ancient civilization whose potential success with a successful and prosperous Muslim minority negates the idea behind the creation of Partition and forces Pakistanis to try their best to bring it down, by constantly pointing out the faultlines in India's not-so-ideal present state of the achievement of the vision, be it riots, Kashmir or other situations, while simultaneously Pakistanis simultaneously live in a religiously exclusivist country and so are seen to have no locus-standi to speak about problems with equality or secularism in India. The extremists among Hindus want an India where only ethnic faiths flourish excluding such converting faiths such as Islam or Christianity which by their very nature deride other faiths in order to gain converts, a perfect Ram Rajya of prosperity, peace and justice. They find it unfair that Muslims in India demand equal or better treatment (as is constitutionally sanctioned) while Islamic societies around the world legally discriminate against non-Muslims, especially those who are seen to be idolators (freedom of belief be damned). After Muslims demanded and got Islamic states for themselves in the subcontinent, Hindus holding this view find it unfair that Muslims should continue to live in India enjoying government coddling in the form of quotas and Haj-subsidies, while simultaneously creating an Islamic society in the new states. They also think Muslims will constantlt attempt to take over India again, with the Muslim population in India acting as a fifth column to support the takeover.

With such contrary viewpoints, a discussion between the two, especially extremists of either variety is an exercise in frustration, though it makes for some amusement to others who prefer to understand the context behind each statement and the historical perception with which it was made. Unfortunately, there are very few of us, and even those that are, are given to occasional failures and frustration when the other person isn't operating with the same aim. So such dysfunctional discussions go on, and will go on in the foreseeable future, and amusement is my only recourse when I encounter them.
Posted by The Weird Indian at 8:12 AM 2 comments:

From my interaction with Muslims from all over the subcontinent, there are two primary viewpoints that I can distinguish when it comes to Partition, that watershed event in the subcontinent's history in the last century. 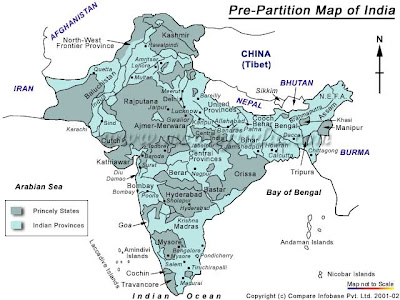 The first one sees Partition as a painful but glorious event, whereby a homeland was created for Muslims where Islamic culture of Mughal and other origins could flourish, where Muslims could keep their customs and traditions alive, free from being submerged and assimilated into the multitudinous multi-religious but Hindu-majority mainstream that was India. This view also holds that if Partition had not happened, Muslims would have been constantly persecuted in India by the majority Hindus. And in support, people holding this viewpoint point to the regular riots and tension between the two communities in India, and point to how the creation of Pakistan and Bangladesh keeps the Muslims in these countries safe from such trouble.

The other view is that Partition was a colossal mistake. Instead of a united Muslim polity in the subcontinent, it divided the Muslims across three states that are pitted against each other. This view holds that this was a grand strategy of the enemies of Islam to keep the religion weak in India and prevent it from ever taking control of the subcontinent again. The event also forever restricted Muslim areas to be those of the new states, and condemned the Muslims who chose to stay behind to a minority existence. They point to numbers where instead of a 500-million-strong (500 million = 50 crores) united Muslim population that would have formed 1/3 the population of a united India and would have had the shared power with the Hindus to decide Indian destiny, what you have today are 3 divided populations, spending billions of dollars in fighting their neighboring states. Instead of a united shining India that would have been the envy of the world, given its rich cultural heritage, its land rich with natural gifts, with enough arable land and food aplenty to feed everyone, Partition left a legacy of squander and death and sadness. A subcontinent this rich, with people so sweet, civilized and cultured to each other in normal times, would have made unbounded progress to quickly take its place among the leaders of the world. With a diverse population, with strong and friendly links with the Islamic world, while being fully confident and proud of its millenia-old heritage embodied in the Hindu, Buddhist and other populations, the country would have been a magical place, to rival the United States in terms of diversity and equality and justice. And Partition, in this view, destroyed all that. That the India that remains aims to achieve just such a vision is small comfort to people who hold this view, typically progressive urban Muslims in India. Both views to me, are fascinating. Has Pakistan achieved the dream of a just, equitable, loving Islamic land? I hope Pakistanis can comment on this. Would India united have achieved the vision laid out by the latter view? It's something to wonder about.
Posted by The Weird Indian at 7:42 AM 1 comment:

Hello, world! The quintessential greeting from the mists of computer history is a good start to this blog which will aim to cover topics of interest to Indians and other people of the subcontinent, from the perspective of a Mumbai-born and -educated Indian who now lives in the United States, giving him a clarity on Indian issues that only distance affords. So stay tuned, for the first post..
Posted by The Weird Indian at 7:36 AM No comments: