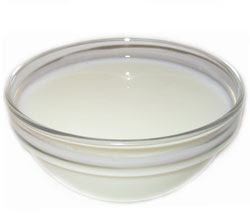 I miss having home-made dahi, that staple of Indian meals. I've been making do with Pavel's Russian plain yogurt which comes very close though the consistency is thicker than our dahi, and Verka Dahi, which again is thicker and sweeter than the home-made variety.

I made one unsuccessful attempt to make it at home using the culture from Verka. There were three possible reasons why it went wrong:
I think the 3rd reason is likely the largest contributor to the failure. The problem is I didn't quite know how to maintain the container at the said temperature; what to use to do this. I considered a few possibilities. A crockpot that can stay warm for hours on end, a toaster oven that I'd set up to stay on at the lowest temperature (which was 150°F unfortunately), the big oven that I'd preheat to 350° and then keep the light on. I wanted something convenient so that I could repeat this forever with minimal trouble. There are directions on the web on keeping ovens within the said temperature but they require one to constantly adjust the settings so the oven doesn't get too cool or too hot, and I was looking for something that did its job overnight. Finally, I settled on a ceramic bowl inside one of those soft thermal lunch bags. I moved the contraption inside my heated room so that the thermal bag didn't have to work too hard. Next morning, I went and looked and it looked like the culture had died too soon because there was a layer of curdled milk on top but the rest of the milk was untouched though slightly sour.

Well, yesterday, I decided to try again. This time around, instead of 300 ml (~10 oz) of good fresh milk, I chose a small glass of milk (about 150 ml, 5 oz), wholefat and non-homogenized, since if it didn't set again, I didn't want to waste so much milk. And besides, I figured that it'd be easier and more likely for bacteria to work on a smaller volume of milk in potentially inhospitable conditions. Microwaved it for about 1 minute 40 seconds at which point the milk had steamed but not boiled over. Then, I made sure to cool the milk enough. I didn't mix it with culture until I could keep my finger in the milk very comfortably for 10 seconds. Once it had cooled to this point, I poured a bit of milk into a separate bowl and mixed it with about 2 heaped teaspoons of yogurt (containing live cultures). And then poured this starter into the glass and stirred lightly so that the culture was well-spread-out through the milk. Remembering a tip from my mom, I lightly rubbed some of the yogurt on the sides of the glass. I set up a heating pad at medium, put the glass (with cover) on it, then rolled the pad over so it covered the glass, and also bundled the glass with towels to preserve the heat. I didn't touch the contraption until morning. The key, I hear, is to not disturb setting yogurt and let the bacteria work their wonder in peace or you will end up with runny yogurt. When I went to check in the morning, what I found was a delicious well-set glass of dahi. Spooning out a morsel, I was amazed to find that it had a nice, subtle tangy taste, the kind we have with home-made dahi in India. I'm overjoyed with this success, and especially because it seems like this could be repeated - there was nothing that was awkward to set up or left to chance.

I've had a nice glassful of delicious yogurt today, with just the taste I like. I've taken out a couple of spoonfuls to use as the starter for tomorrow's glassful. Hope this experience helps others who're experimenting with home-made dahi too.
Posted by The Weird Indian at 2:57 AM 1 comment:

I'm a recent introductee to the CrockPot™ - the slow cooker that cooks at low heat for hours. There are so many delicious Indian recipes that require low-heat simmering for long periods of time, that the CrockPot should be perfect for them. The one that comes first to mind is Biryani. It requires low-simmering for a day in order for the food to deeply absorb the subtle taste and result in the wonderful flavor we all know as Hyderabadi Dum Biryani. Well, since I'm not too well-versed in the usage of the CrockPot, I'm going to go with this recipe of Butter Chicken (Murgh Makhani मुर्ग माखनी) that seems to be presented by a slow-cooker expert. I will report back in a few days once I've tried it out.
Posted by The Weird Indian at 12:01 AM No comments: I love milk. Whether it's simple hot milk spiced with saffron, almonds and elaichi. Or a rich creamy basundi or kheer. And I've been deprived of it since I came to the US. In the US, what is sold in stores is something called pasteurized homogenized milk. It's milk made by Holstein cows who're fed corn and grains (not something cows digest naturally without antibiotics - you can read all about how animals are treated in this country under factory farming techniques by doing a Google search). The milk is then pasteurized and homogenized - homogenization involves pulverizing the cream on top under high pressure so that the fat molecules get suspended and uniformly distributed across the milk. Homogenization single-handedly destroys the taste of the milk, turning it from the delicious brew we enjoy in India to a yucky-tasting insipid and watery beverage. Apparently, there was massive negative reaction to homogenization when it was first introduced in the US, because the milk just tastes so obviously bad when it's homogenized. If only taste were my only problem with milk in America. For whatever reason, drinking milk here used to make me ill. One glass of milk and I'd run to the restroom with diarrhea. The symptom suggested 'lactose intolerance'. People with lactose intolerance have digestive systems that can't handle lactose which is found in ordinary milk. But to label someone like me, who has been drinking cow and buffalo milk since toddler age, 'lactose intolerant' seemed baffling and a bit unbelievable to me. Regardless, I stopped drinking milk with all the adverse consequences - I started falling sick more often, lost my digestive immunity and just had problems with food all round.

That is, until some American friends of mine suggested I try local dairy milk, made from cows that are grazed on grass and hay, the ruminants' natural food. This legendary milk was non-homogenized to boot. It came in glass milk bottles with the cream on top. And you returned the bottles to the store after use so they could be recycled. With memories of my beloved dairy farm milk floating in my mind, and with a twinkle of hope in my eye, I went to Whole Foods the very next day and got this all-natural organic cream-on-top, grass-grazed-cow milk produced by Straus' Family Creamery. And discovered heaven :). I swear by this milk. The milk is fresh, with natural cream on top (you can mix it in by shaking if you want, though I love scooping the cream out and topping my cereal with it - yummy!). I get the pasteurized version (for safety), but they also sell raw milk, the kind we get in India from farmers and that we heat to boiling almost immediately before refrigerating. And the most amazing thing of all - I can drink oodles of it without any digestive problems. I don't really know what it is about the milk. Is it the diet of the cows? Is it the non-homogenized nature of it? All I know is that I can drink milk again. And boy, has it restored my health! I'm glowing with health again. All my digestive problems have disappeared (well, skipping HFCS and partially-hydrogenated fats seemed to have helped as well). Woohoo! There's just nothing like being able to drink milk again!
Posted by The Weird Indian at 11:40 AM No comments:

So I just found out that the USPS (United States Postal Service) is about to switch over to a new barcode system called the Intelligent Mail barcode. Thus far, we've all been familiar with the POSTNET barcode. We find it on all our mail. Sometimes, even the sender's ZIP is encoded in POSTNET (for quicker returns, I suppose). When I first discovered these barcodes, I experimented with mail trying to see if barcoded mail really is routed faster - it is; OCR'ing handwritten addresses at source before they're barcoded does indeed add delay. Most word processing programs (Word is the most common - use Insert > Field > Numbering > Barcode or check "Add Delivery Point Barcode" in the Labels dialog) allow one to generate POSTNET barcodes without any problems. Snail Mail is another program that handles envelope printing with barcodes quite neatly - and it handles barcodes from many other countries besides the US.

Back to POSTNET, there are 3 primary types: ZIP (6 digit barcode), ZIP+4 (9 digit barcode) and ZIP+4+DP (11-digits). The ZIP code is a coarse-granular code that defines the post office that's in charge of the address. ZIP+4 appends 4 digits to the ZIP that define the specific area/block for the address. And ZIP+4+DP includes a 2-digit delivery-point (DP) which specifies the precise mailbox. The +4 and DP are used by the mail system to sort mail in an order that makes delivery by the postman (mail carrier) efficient. The carrier doesn't need to sort his or her mail manually when getting ready to go out on his delivery route - his stack of to-be-delivered mail is sorted so that s/he can just deliver it in the order it's stacked. Pretty cool! All mail that enters the US postal system is barcoded (presumably at the originating post office). Handwritten addresses are scanned by an OCR system and a barcode sticker pasted on the envelope (that's the yellow barcode strip you see on handwritten mail at the delivery point). Needless to say, mail handling and routing is superfast and completely automated when all mail is barcoded right up to the delivery point. And now, with Intelligent Mail, additional services are being provided to businesses through a new 4-state barcode. Implementing Intelligent Mail barcodes is mandatory for companies starting in 2009, if they wish to avail of mailing automation discounts. The old POSTNET and PLANET are expected to be phased out by 2011. Here's a picture demonstrating the impact of the new barcode. 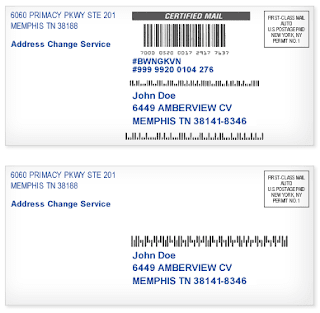 I wonder when India will start using this kind of technology. It's pretty basic and even if OCR isn't advanced enough or too expensive to handle all our scores of language scripts and the mail needs to be barcoded by someone manually at the source post office after reading the destination address, it'd speed up postal routing tremendously.
Posted by The Weird Indian at 6:09 AM 5 comments: